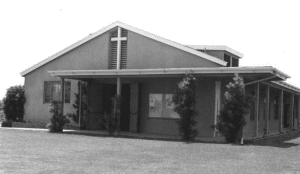 In 1950, during the post war building boom, the Santa Ana District of the Methodist Church purchased 22 acres of orange groves along Cole Road in Whittier to build a church in 1951. Jon D. Lusk, a home builder and a Methodist, donated his home on Whittier Blvd. to be the first building of this new church. It was moved to Cole Road at Hayward Street, where it still stands as Lusk Hall. This home was first used as the offices of Dr. Abraham Lincoln Baker, who was the planner of the church property. It was used as the parsonage for Raymond L. Wirth, our first pastor. The first worship services of the East Whittier Methodist Church were held in the living room of that home in late 1951. Twenty three members were present.

While the first new building of the church was being built, Pastor Wirth made use of a citrus fumigation tent for his services. This new building, Baker Hall, was dedicated in November of 1952 and served as the sanctuary and offices of the church. It was rapidly outgrown and was expanded in 1956. Today, Baker Hall holds the offices, lounge and library of the church.

In 1958 Owen W. Geer became the pastor and began planning for a much larger sanctuary. That building was dedicated in 1960 and remains our sanctuary today. In 1966, while our pastor was Rev. Sanford Sweet, Geer Hall was built and dedicated as a multi-purpose building. Geer Hall holds a large dining hall (sometimes basketball court), large kitchen, bathrooms and classrooms. It is this building that allows us to host the Cold Weather Shelter for several weeks every year. Boy Scout Troop 985 has been chartered out of EWUMC for fifty years and has produced over 150 Eagle Scouts, utilizing Geer Hall for many of their functions.

In 1968, with the joining of the Methodist, Evangelical and Brethren churches, our church officially became East Whittier United Methodist Church. That year our membership was 1,630 and growing. Since that time McKenzie Hall was constructed and is used as a youth meeting place, as well as for groups such as Alcoholics Anonymous and Ala Non. Also new buildings went up for our Preschool, which serves many families in our area.

From our inception to today, we have had twelve pastors serve our congregation. They are: 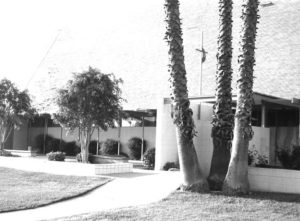 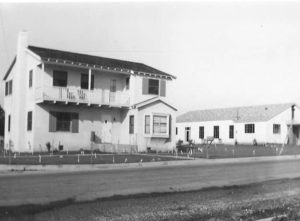 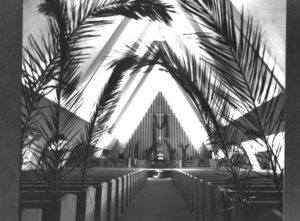 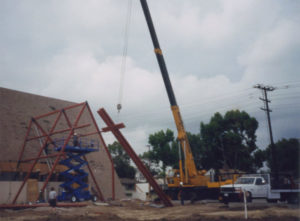